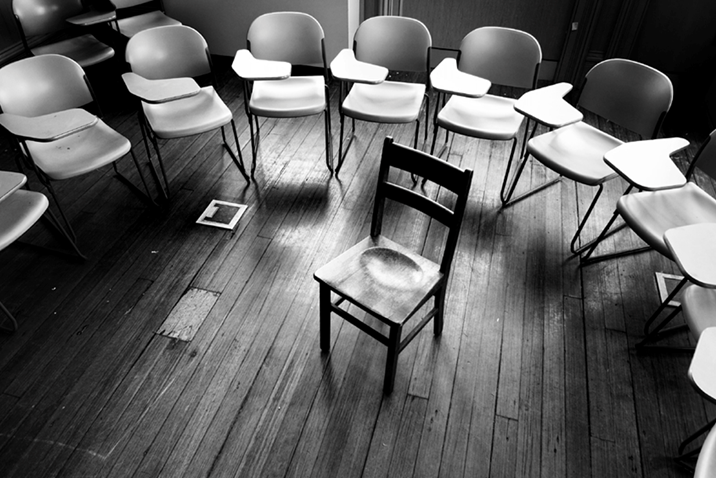 Rather than studying how to craft stories and beautiful verse, we learned to deflect blows and develop thick skins. By the end of each session, my tongue was sore from being bitten, and while the rest of the group were unpublished writers, they saw themselves as expert critics.

During the course I didn’t learn where to appropriately employ the semi colon (in truth; nobody knows), but no matter who you share your miserable Mondays with, I learned that words need to be chosen with due care, and shared with extreme caution.

Before we toddled off to the bar, we had our final session in the classroom. Samuel read from his latest sexually charged diatribe. ‘I moaned in unbridled ecstasy as he caressed my inner thigh. The flaming sun blazed through the open window, into my tempestuous heart . . .’

‘Very powerful, Samuel,’ the tutor offered. ‘Perhaps you might remember that a lot of publications don’t accept erotica, though.’

‘No, no. Only that it’s important to embrace the emotive elements of your writing. Study feelings, not features.’

The tutor, MArcus — a trendy polytechnic literature professor — spoke almost exclusively in meaningless alliteration. He told us to be less ‘literal’ and more ‘literary’, or more ‘discursive’ and less ‘descriptive’. In case you are wondering, it’s not a typo. We all called him (em-ay-arcus) behind his back as he let us know at every opportunity that he studied his MAsters at Stanford, under the tutelage of the MAsterful Tobias Wolff.

In all honesty, the others were sick of Samuel’s agenda too. His readings transformed the classroom into a Soho dive bar, except it was one without the possibility of guilt-free sex. We watched his t-shirts get tighter every week, stretched over his belly, with his bearded head bobbling on top. He announced in one session that he was in transition from cub, to bear. I had no idea what this meant, but refrained from asking him if that meant he now shat in the woods.

Samuel was by no means the worst storyteller in the group. Rita, the quick-witted barmaid, treated us to a series of tales about Jack the Ripper’s brother, who didn’t even murder anyone. Another torturous experience was listening to executive assistant Gail’s stories. She dictated her pieces with the clarity and precision of someone who expected us to copy it down word for word. I did try to take notes once, but I lost the thread with her list of bizarre character names — Finkel Brunardi, Penelope Skylark, Marmaduke Beaujolais the third.

When I read my poem, the hounds lay ready to pounce, waiting for MArcus to give the first critique.

My thoughts stuck in neutral.
Dashboard lights blinking
Some kind of secret message.
The engine turning over
And out.

The belt had tightened and torn in,
Your heart, crumpled steel.
May you rest in pieces
On the hard shoulder of my memory.

‘Was it about the car or an accident?’ said MArcus.

‘You sounded more concerned about the loss of your no-claims bonus, Duncan.’

A few of the others tittered. I closed my notebook in defence.

‘I think it’s because you mentioned all of the parts of the car,’ said Gail, checking her notes and nodding.

Being deaf in one ear often helps me ignore criticism, but I was proud of that poem, I’d spent days tinkering with it, tuning it up.

‘It’s not a complete write-off,’ said Samuel, ‘I’m sure you can fix it.’
MArcus looked on, grinning. ‘Hey, do you know the last thing to go through Princess Diana’s mind?’ he asked.

An agonising silence followed. We all tried to ignore his raised eyebrows. That was the famous ‘sense of humour’ he often mentioned.

The classroom was part of a drab adult education complex in Holborn; where theatre shows go to die, and cafés sell falafel burgers for £16.95. They seemed to have a policy of removing anything art-like from the walls, and kept the strip lights at nuclear brightness.

By the evening, all that was left in the cafeteria were sad egg sandwiches and stewed tar coffee. Signs at every table reminded us that the staff would remain vigilant against the introduction of ‘outside foodstuffs’. If they did smell something fishy, it was probably the tinned mackerel that I ate in the foyer each week.

Gail’s detailing of the dark arts of waste water disposal never helped whet the appetite anyway. She informed us that ‘sewage is the unprocessed household discharge, and sewerage is the system of distribution and filtration networks.’ Her sensible 1980s suit played foil to a blouse that looked like a tossed salad, and Gail’s hair was so wiry it could have removed even the toughest stains from a tray of baked lasagna. Cillit Bang, move over.

Back in class, Paddy did his best to help repair my broken ego. ‘I liked the bit about the seat belt tightening too hard. It’s obviously a poem about a person. Do you really think it is an ode to a Volkswagen Golf?’

Good old Paddy. He was another fascinating regular, an aspiring playwright who spent six months of the year transporting leathery millionaires around in their oversized bathtubs, and the other six twiddling his thumbs and presumably eating spinach. He had a handsome face, ruined by a nose that looked like it belonged to a roast dinner. Sometimes I felt like we were the only ones trying to keep the classes afloat, bailing out water while everyone else continued to pick holes.

Rita smiled though her thick layers of make-up. ‘It could be Empty Seat, like the Spanish car brand,’ she said with a wink.

Even I smiled at that one.

After class we walked into ‘said bar’. The whole rag-tag bunch. It was a characterless chain pub, which smelled of olive oil and extra-marital guilt. MArcus was doing his best to trap Rita (who was twenty years his junior and way out of his league), in his web of literary cleverisms, talking about the latest anthology he hoped would help his career take off. We all hoped that he would take off.

‘Who even invited him?’ she hissed, coming back from another toilet trip. ‘I wish he’d take a hint and go.’

‘I suppose I already have.’

MArcus oozled his way over to the group, with his smug glass of port and his cashmere jumper.

‘Is that to learn how to write fantastically creatively brilliant stories?’ I asked.

‘Rita, I’d like to speak to you about something,’ said MArcus, breaking the silence. ‘In private.’

‘You can tell me here, it’s fine,’ she said, clearing the blonde hair from her face.

‘It’s a scholarship opportunity. Let’s go to the bar, come on!’

Rita gripped her chair like a cat avoiding a trip to the vet. The others watched and sipped their drinks.

‘Whatever do you mean, Duncan?’

‘She’s happy with us here. Just leave the girl be.’

He set down his leather briefcase. ‘Well who asked you, Granddad?’ he muttered.

‘I don’t even know why you bother,’ he said. ‘I’ve got my whole writing career ahead of me. You’ve got ten years, at most.’

No one leapt to my defence that time. The group concentrated very hard on the sipping of their drinks and at studying the decor.

That man needed to be put in his place, and I don’t mean back in the fellows’ smoking room at The University of the Uninspired. I pulled at his jumper sleeve and took him to one side.

‘Granddad has some bad news for you. He’s already sold more books than you ever will.’

Nonchalant as ever, he finished the port in his glass. ‘What’s that?’

‘Well, I haven’t been completely honest.’ I said, putting a hand on his turtleneck shoulder. ‘My name’s not Duncan. It’s Dylan. Dylan Bainbridge.’

‘What are you talking about?’ he scoffed. ‘Dylan Bainbridge?’

And with that, the student had become the master. It’s funny that the identities of most successful authors remain hidden on the inside a book jacket. Nobody cares what you look like, unless you are ‘multicultural’ or ‘sexy’, or J.K. Rowling, and I’m certainly none of those things.

He slumped onto a nearby stool. ‘But that was a bestseller, half a million copies. Why are y—‘

‘Oh, the class?’ I said. ‘Well, established authors can be such tortured souls, it’s much better to share your thoughts with real people.’

He looked back at me open-mouthed.

This was the first time that MArcus had been lost for words since 1997 (which, he had boasted, was the only time he’d ever suffered from writer’s block). He shut down like a cheap laptop and stood at the bar — his face a blue screen of death. After a few seconds, his self-preservation code kicked in and he snatched his bag and went. He looked like a robot who had forgotten how to walk, bumping into a couple’s table and sending their nibbles into complete disarray. MArcus 3000 bleeped some kind of apology and wheeled off.

I had never planned to tear off my mask like some kind of decrepit super hero, but I got more satisfaction from that one moment, than I have from any book signing or awards gala. Does that make me sound callous? Well, a lifetime of nobody listening, followed by everybody hanging on your next 120,000 words can make you a little cynical.

Lying to them all every Monday was the biggest rush I’ve had since I accidentally stole a Curly Wurly from the newsagent (and that was last century). But even with my less-than-subtle poetry, I found that I’m good at hiding in plain sight. Reeling off a pack of lies each week and having people believe you isn’t all that hard. It’s all just fiction.

The first time he sat on me, John Lovelace was a young man. He was a straight-laced, straight-A graduate with a new job in the zoning department. John used to eat his lunch in City Hall Park, overlooking the lake, alongside other workers sitting on their benches. He never changed places. His brown paper bag contained the same every day — a peanut butter sandwich, a granola bar and a red apple. He would drink from the water fountain when he was finished.

One sunny day, Marta joined him on his bench, and while he brooded over his sandwich, she feasted on a colorful salad. Marta asked if he was going to finish the other half of his granola bar. John laughed and handed it over. The next day, she brought an extra piece of cake in case John wanted a change. He did.

They developed a routine, exchanging pieces of their lunch and married the next spring. Every day at one o’clock, they sat and shared fresh baguettes, homemade chutneys and olives that came from expensive looking jars. Gone were the peanut butter sandwiches. When their first child was born, Marta stopped coming to the park, but John continued.

After a few years, I noticed John’s backside expanding. He went from tubby to plain overweight pretty fast. Fewer people joined him as there was less space on the bench.

One Monday, John didn’t bring his lunch to his spot overlooking the lake. He wasn’t retirement age and I knew he wasn’t on vacation either. A month later, Marta returned to where she’d first met her husband. She had a brown paper bag with John’s name on. She carved their initials onto my armrest with a pocket knife, then she sat and cried. Marta removed a peanut butter sandwich from the bag and hurled it into the lake. She never came back after that.

Unfortunately, J.L. and M.L won’t be together forever. The City Council are replacing all us benches with vandal-proof plastic ones. There was nobody left at the zoning office to deny the application.